For 25 years, we have been benefiting from borderless travel across Europe, thanks to the Schengen Agreement. EU citizens have the right to study, work, live, or spend their retirement in other EU countries. That seems meanwhile to be taken for granted. Unimaginable that it could ever be different again, in particular for the young generation, who does not know any other status quo. Only in the wake of the refugee crisis in 2015 have border checks cropped up again, an inconvenient anachronism, and a rare exception?

The EU is – rightly – criticized for a number of grave mistakes. At the same time, many people seem to share the basic assumption that everything is and will be kept on the right course as if by an invisible hand, by a kind of EU autopilot, in principle peaceful, liberal, democratic, and institutionalized, and which can do without help from its citizens. It is all too easy to forget the merits of stable peace, on a continent plagued by centuries of war – the historical achievements of the EU, a precedent worldwide. Internal wars now seem unimaginable, an attack from the outside rather unlikely. But how about destruction from the inside?

Each and Every EU Citizen Has to Actively Participate

As Jeremy Rifkin pointed out twenty years ago, the European project is a dynamic process, not a stative end-result. What that implies is that the Europeans have to keep working and fighting steadily for their shared future to avoid losing their way and going astray in the breath-taking dynamic speed at which the world is racing ahead currently, and to avoid losing what has been achieved in never-ending processes of decision-making, balancing of interests, and struggling to act as a community – in order to obtain, again and again, what many may see as already secured forever.

That also means that ALL EU citizens who believe in this project have to participate actively, and try to fight against deficiencies, develop sustainable solutions, and support future-oriented decisions. They must not leave the battlefield to those forces that, very actively, pursue nationalistic, anti-democratic, and illiberal self-interests, or that seek to undermine the European project altogether.

The election of the EU Parliament, which has obtained more and more significance and power (and from which the President of the EU Commission emerges indirectly), is an important milestone of the participation and contributions of EU citizens, an act of voicing their opinions, demanding direction, and, not least, a backing and call for the EU Parliament to carry forward the cause of the European unity, through a high turnout of voters to begin with.

The Brexit – a Cautionary Tale

What happens when things are taken for granted and people believe that everything will be alright without them going to the polls can be viewed in Brexit. For months, thousands of British citizens have been protesting in the attempt to turn around the outcome of the referendum, which was caused by those citizens that did not care to go to the polls, in the treacherous conviction that everything would be alright anyway.

It is extremely dangerous to assume everything will go into the right direction automatically – given the fact that extreme forces are operating especially effectively, and are striving to demolish the system from the inside. The baneful chancellor of the German Reich, who dreamed of a millennium Empire built on millions of dead bodies, initially came to power legally. After he had seized power, however, any resistance was in vain, and everything lost. The error consists in the belief that liberal democratic institutions can always reliably fend off any illiberal dangers per se. The phenomenon of President Trump illustrates very well how even robust institutions can be turned into enemies of what they are actually meant to stand for, for instance through lies, spineless leeches, or antidemocratic staff in government offices.

Simon Blackburn, the British philosopher, warns: „… we tend to think that modern institutional democracies are fine regardless of the private vices of those within them.“1 This assumption bears even higher risk for a community of many sovereign states with their very own historical developments and mindsets, which has to permanently struggle for consensus with perseverance and patience, despite different interests, in order to push the European project forward together.

The First Duty Is to Go to the Polls

The message is clear: the Europeans must not a single moment slow down in their efforts to build a sustainable, peaceful future for Europe; it is a highly dynamic process.

Hence, the first (and easiest) duty is to go to the polls.

Simon Blackburn writes: „A more pluralistic and relaxed appreciation of human diversity is often a welcome antidote to an embarrassing imperialism.“2

What is urgently required in times of fake news, lies, and manipulation is, more than ever, solid education, critical analysis, and the thorough and critical collection of information from diverse sources. For an international university such as Munich Business School, with its diversity, liberality and self-development, fairness and community spirit in its DNA, this can only mean active support for the European idea, the elections to the EU Parliament as an ever more important driving force for European civil rights, freedom, peace, European unity, as a democratically legitimized institution and platform of debate about what is the right way.

About Prof. Dr. Harald Müllich 4 Articles
Prof. Dr. Harald H. Müllich did Romance studies as well as German, English, Spanish and Italian language and literature studies at Friedrich-Alexander-University Erlangen-Nuremberg, Manchester University and Université Lyon II. He holds a Master's degree in English and Gallo-Roman philology as well as in German linguistics and passed the 1st and 2nd state examinations (incl. pedagogical examination) in English and Romance studies. He earned his doctorate "magna cum laude" in applied linguistics (Romance & English studies) at University of Erlangen-Nuremberg. Prof. Dr. Müllich has extensive experience in the business and education fields. Since 1991, he has been Professor of Business Languages (English/French) and Intercultural Competencies at the faculty of business administration at University of Applied Sciences Munich. He is also the international coordinator of University of Applied Sciences Munich, author of numerous textbooks, and lectured at universities in China, France, England and Italy. At Munich Business School, Prof. Dr. Müllich has been a lecturer for Business English, Business French and Intercultural Management since 1991. 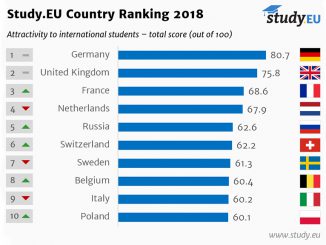 Study.EU Country Ranking 2018: Germany Is the Most Attractive European Country for International Students